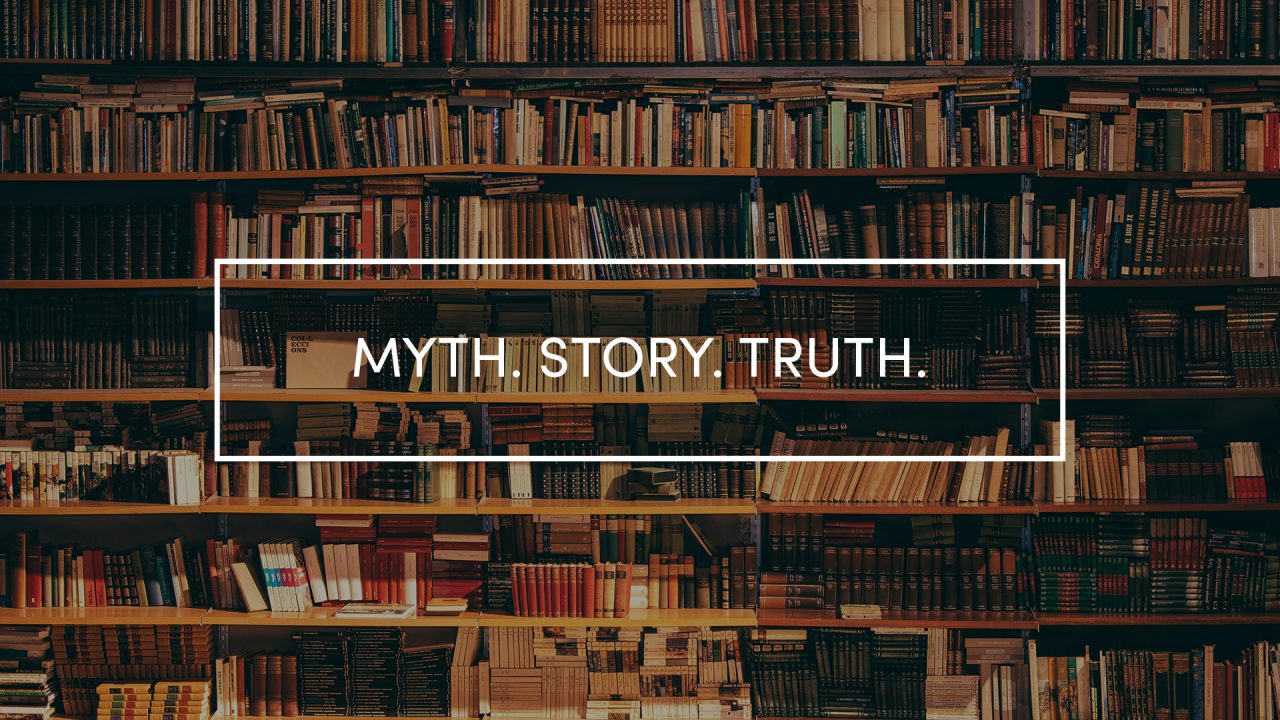 In his book, Simply Jesus, N.T. Wright defines the word myth as a story that purports to be, in some sense, historical and that encapsulates and reinforces the firmly held beliefs of the community that tells the story. The English word myth derives from the Greek word mythos, which means story. Richard T. Hughes contributes to the expansion of myth when he states that contrary to colloquial usage, a myth is not a patently untrue story. Instead, a myth is a story that speaks of meaning and purpose, and for that reason, it speaks truth to those who take it seriously.

Can you think of an example of a myth? Perhaps several come to mind. Hopefully, whatever you just thought of is not an overt fairytale. An informed understanding of a myth leads us to recognize facts are the basis of the story. The context of the story and the worldview of the storyteller is the layer of information labeled myth. For example, one might state that the Springville Cemetery on Richmond Avenue in Staten Island contains a military marker on the grave of Ichabod Crane. Col. Ichabod B. Crane existed and was a contemporary of Washington Irving’s. However, Crane was not the spindly bookish schoolteacher in The Legend of Sleepy Hollow, which Irving published in 1820. No, Ichabod B. Crane died at his home in Point Richmond in Staten Island, in 1857.  Crane served in the Marines for 45 years and never met the headless horseman.

However, when I traveled through the state of New York several years ago, I drove through the town of Sleepy Hollow. The police vehicles I saw in Sleepy Hollow had the town seal on their doors. The town’s seal contained the image of the headless horseman. The Legend of Sleepy Hollow is a mythological telling of a real person’s life.  However, the base facts have been layered with false information leading to a false myth and an untrue story.

We find ourselves living in the middle of false myths and untrue stories. Prepare yourself for some deep mental, spiritual and emotional work. The rhetoric contained within the founding documents of the United States of America is mythical. We are not “one nation under God,” there is no “justice for all,” and we do not view “all men [sic]” created equally. Moreover, the United States is not the hope of the world. If this is shocking to you, look around our country. Turn on the news, injustice is evident everywhere. The freedom of religion has allowed many of our citizens to select “none”.

In drafting the Declaration of Independence, Thomas Jefferson’s strategy was to embrace a religious faith that would not divide but unite Americans. Richard T. Hughes claims in his book, The Myths America Lives By, that “what Jefferson did not say is as important as what he said.” The Declaration of Independence said nothing about Jesus, the Trinity, the Church, the New Testament or the Old Testament. Instead, Jefferson “rooted the American Revolution in the existence of a god, apparent to all human beings in nature, and a moral order that he proclaimed as self-evident.” Considering the frequent claim that America is a Christian nation, the truth is, America is rooted squarely in a Deistic worldview common to the eighteenth century. Jefferson claimed that it made very little difference what religious faith one embraced, just “so long as one believes in God and lives a good moral life” in support of the Republic. Americans were free to believe in their interpretation of God or free to not believe in God.

The myths Richard T. Hughes covers in his book, Myths America Lives By, implicitly deny that the United States has a historically rooted story.  There is just enough information in the nation’s documents to gloss the concept of God without mentioning Jesus, the Trinity or any significance to God and His mission for the world in everyday life. The founders knew exactly what they were doing and precisely what they were preventing, a Christian nation.  Interestingly, it seems there are just enough echoes of Pauline theology in the Deism that founded the country to appease most Christians. The myth of Nature’s Nation appears to indicate that creation provides enough evidence for all to believe in God. These statements loosely connect to the letter to the Romans. However, Paul speaks of sin and humans being given over by God to their “unnatural” desires. What Deism claims is natural, Paul declares, unnatural. The pursuit of happiness is much different from the pursuance of the image of Christ and the Kingdom of God on earth as it is in heaven.

What are we to do? The book of Exodus highlights how the Hebrews did not know God. “God heard their groaning, and God remembered his covenant with Abraham, Isaac, and Jacob” (Exodus 2:24). God spent patient, loving time to make himself known to the Hebrews. Each idolatrous and foreign god was dethroned by God one at a time until there were no remnants of false stories from the dominant surrounding culture. In other words, incorrect historical data was systematically processed and replaced with truth leading Israel to launch God’s mission for the world as His chosen people. Israel became oriented to the world, existing for the sake of others. Jesus’ Church must do the same.

Here is the Good News, the historical fact of a human being named Jesus of Nazareth is true. The stories of Jesus’ life found in the books of Matthew, Mark, Luke, John and portions of Acts are mythic. Each account of Jesus’ life, ministry and death is slightly different due to the author’s worldview, audience and context. The same would happen if we all wrote a story about a real person today without embellishment. Most likely, each author’s account of the life of the protagonist would be slightly different due to our interaction with their life. However, the difference in the story of the Bible and particularly the story of Jesus, is that it is a true myth. We must continue to pass down the story from generation to generation while living it out in plain sight of the surrounding world.

Therefore, the Church universal needs to be about the Kingdom of God. Christians must stop holding the United States as an exemplar of strength, hope and the destiny of the world. Christians must stop stating “liberty and justice for all” without working to make it a reality for all. Christians must stop asking for people to recognize others as Americans and fellow human beings without regard to ethnicity, race or any other dividing line. It is past time for Christians to listen to all, learn omitted historical data, remove false data and point toward the only true myth, the Kingdom of God.  The Bible clearly states that all nations and kingdoms will be destroyed. The United States will be one of those nations but Jesus’ dominion is everlasting. It will not pass away and His Kingdom is the one that will never be destroyed (Daniel 7). How does Scripture describe that Kingdom?

May the Lord bless you and keep you and give you peace until we meet again, and may the Holy Spirit open your eyes to every possibility to represent the Kingdom of God as an ambassador of Christ welcoming all just as Jesus welcomes you.