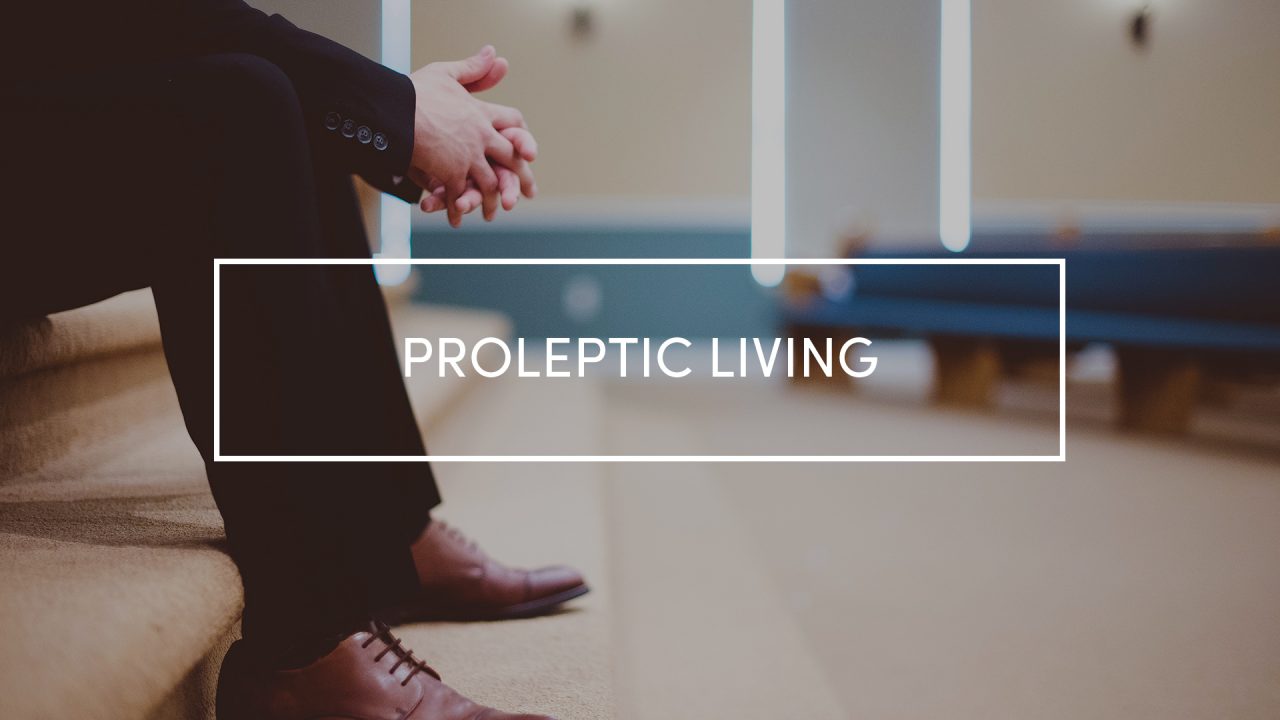 The word proleptic has several definitions. For this discussion, I suggest the following two meanings: 1) the use of a descriptive word in anticipation of its becoming applicable and 2) the assigning of a person, event, etc., to a period earlier than the actual one; the representation of something in the future as if it already existed or had occurred; prochronism.

Lee C. Camp provides a personal proleptic example in his new book, Scandalous Witness: A Little Political Manifesto for Christians. Camp presents a future event that is so sure to come true, so sure to be the case, that it is spoken of in the present tense. Lee illustrates this concept with his sons. When Lee’s boys were young, Lee was ready to drive them to school one morning. Standing in his kitchen, Camp shouted up the stairs to one of his sons, “I am in the car.” Camp’s younger son in the kitchen with Lee said, “No, you are not Dad.  You are standing in the kitchen.” Lee went on to explain that he was speaking proleptically. He was so sure of what was to come, even though it was in the future, that he spoke of it in the present tense. Perhaps you have done the very same at times.

So what? Why the vocabulary word, definitions and illustration? Connecting back to a previous blog (Gospel Glasses) on expanding the Gospel to a worldview (Mark 1:14-15,) the inaugurated Kingdom of God provides a proleptic political view. Many Christians approach Scripture as a history book. Others see the Bible as “basic instructions before leaving earth.” Where the Bible does contain history and Christian formation teachings of discipleship, it is often merely applied in a personal autonomous framework. “What must I do and continue to do to be saved?” However, Jesus has saved us for a purpose. The Gospel is not merely how to be saved, it is what we are saved for and our true human vocation.

In another book by Lee C. Camp, he claims that “radical” discipleship is not an easy subject to articulate. However, Christians should stand in solidarity with Dietrich Bonhoeffer, who said, “Christianity without discipleship is always Christianity without Christ.” Camp suggests the proclamation of the Gospel has often failed to emphasize the “rooted” or “radical” claim: “Jesus is Lord.” Instead, Christianity has repeatedly cozied up with political, economic, cultural or ethnic authorities. Theologically, Camp asks the question: “Could it be that ‘Jesus is Lord’ has become one of the most widespread Christian lies?” Camp’s question triggers an internal reaction as we read the sentence. Yet, I believe his challenge is a poignant highlighting of the real mission of Jesus’ Church. Jesus did not go about preaching and teaching how to be saved, allowing the world to remain unchanged with marked individuals for an unknown future. No, Jesus went about preaching and teaching the good news of a better way to live today, how to be indeed human (Matthew 5; 6; 7).

The birth of the possibility of a widespread lie about Jesus’ lordship stems from Camp’s identification of “cataracts” over the historical trajectory of Christianity. Camp identifies cataracts as distortions of the Christian vision. The Kingdom of God and discipleship lose their Biblical emphasis due to long-inherited presuppositions and assumptions. Emphasis on religious ritual replaces discipleship and the Kingdom. “Church,” connotes a hierarchy protecting “orthodoxy” rather than a community of disciples living as the “body of Christ.” Western Christians might say civil religion mixed with the American Dream missiology has caused the relationship between the Gospel and culture to be replaced by a relationship with the American denominational church and culture. The church in the United States suffers from attempting to respond to each cultural change to maintain its relevance rather than converting the United States to a relationship with the Gospel.  Throughout the twentieth century, the churches in the United States have modified the good news they have preached to accommodate cultural values. The modification has placed the church in a reactive posture to the culture instead of presenting itself with an identity strong enough to reform the culture. Camp succinctly says, there is no way to tell from many Christian’s lives whether they are a believer. “Jesus is Lord” does not reflect in the life of such an individual.  One either follows Christ or does not. Christ is either Lord of all lords or denied as Lord of any. Therefore, the Gospel demands radical discipleship.

Pragmatically, Camp suggests that “following Jesus” in the United States has become something one does on Sundays and in one’s quiet time to “go to heaven,” but the way of Christ has no place in the real world. Camp joins David Lipscomb, insisting that disciples prioritize God’s Kingdom, rather than the self-seeking kingdoms of this world. Like Lipscomb, Camp refuses for disciples of Christ to separate the Gospel from their current context.

Christians must invest the time and energy necessary to clarify what we believe and why we believe it. Otherwise, we will not be able to share our message of the good news well. Radical discipleship will only be enticing to a hearer of the good news if the Gospel is, in fact, good news within their narrative. Camp similarly said, “theology is learning to tell the story well.” Telling the story well invites people to be transformed by the message. This transformation leads to a narrative exchange. One will want to release the story the world provides for the eternal life narrative only available in Jesus.

Additionally, telling the story well highlights how God has always been active in people’s lives. Christians are not bringing God to people. Christians are nudging people to see the signs of how God’s story has been weaving through their personal stories all along. Once people see discipleship as reconciliation with God for which every human being is made, then we can all radically live into the Kingdom of God together. The community that forms will threaten the very fabric of the political, social and religious status quo. “In nationalism, our ultimate identity lies in being ‘American.’ In baptism, our ultimate identity lies in being disciples of Christ,” says Camp. Our model of evangelism and apologetics ups the ante: if you wish the world to believe what you say, you must live as if you believe what you say. This is the proleptic voice.  Describing the vocation of the Church in the world is the key to Christian ethics and much of the New Testament. Radical discipleship calls us to a proleptic stance in which we embody and bear witness to the world that is coming. Jesus is radical. Jesus welcomes all from all the narratives in which they are embedded. The Church is the Kingdom until it arrives in full with Jesus’ return. May we be about all the abundance, generosity, hospitality, love and equality of the Kingdom in the present. May we be so sure of our future, that we claim it and live it in the present. May we be proleptic people.

May the Lord bless us and empower us to live in the present as we will live in the future with Jesus and all the redeemed.